Phoenicians: who were they and what they did in Mazarrón

Home / Blog Eng / Phoenicians: who were they and what they did in Mazarrón

You probably have heard about the importance of the Phoenician ships found Mazarrón, but what did the Phoenicians and their ships do on the coast of Mazarrón 2700 years ago?

Who were the Phoenicians?

They were a native people of what would be Lebanon today, in the eastern Mediterranean. They did not have it too easy to develop their country by land, as they were surrounded by hostile villages, large empires and mountains (which made it difficult to farm and land transport). Given the situation, they began to build wooden boats from their cedar forests and waterproofed them with advanced caulking techniques such as impregnating them with bitumen.

In this way, they hit the sea to trade. It should be noted that they were not warriors or conquerors, they were merchants without any warlike claim. They were the merchant version of the Vikings, but, luckily, much more peaceful.

Since their expeditions use to cover great distances, they were creating “logistic” settlements in islands and other areas far from the local population to avoid conflicts. Some of these settlements came to have large factories and eventually became authentic cities.

They also knew about night navigation, as they learned to be guided by the Ursa Minor.

What did the Phoenicians trade with?

The Phoenicians produced different types of handcrafts such as carved fabrics, wood and ivory, pendants, bowls and other luxury products. But they certainly stood out more for their business skills than for their products. They were intermediaries, exchanging their products with some other people and then exchange again in another port. Doing this, they obtained various raw materials such as silver and lead from Spain, wheat from Egypt, ivory, gold and papyrus from Africa or oil from Greece. Thanks to these commercial skills they could also guarantee immunity to the different empires that surrounded them, the Assyrians, Babylonians and Egyptians, who had a special interest in metals.

What were doing the Phoenicians in Mazarrón 2700 years ago?

It seems that, based on the different archaeological sites, Mazarrón was one of the first Phoenician settlements in the Iberian Peninsula. One of the greatest discoveries about the Phoenicians was the two wrecks on Playa de la Isla, dating from the 7th century B.C.

Mazarrón already had a great mineral wealth, as we pointed out in this other article of our blog, so it is not difficult to deduce the commercial interest that the Phoenicians could have in this area. Metals (especially lead and silver) were one of the raw materials traded by the Phoenicians, as they had a high commercial value, especially to deal with their powerful neighboring empires as we have already pointed out above.

The Phoenicians developed settlements (“logistic centers”, as I explained before) along the Mazarron coast, taking advantage of the islets and headwaters that enter the sea and that kept them at some distance from possible attacks.

Thanks to the Phoenicians, the people who settled in the area were able to access goods and raw materials, otherwise unknown and inaccessible to them, in addition to the important cultural exchange that resulted, resulting in greater naval development, the development of salting technique (salazones), or even the introduction of the alphabet.

It is estimated that the Phoenicians had a presence on our coasts for 200 or 300 years, until the fall of their main city-states.

We find very interesting the history of exchange and cultural diversity that laid the foundations of the Mediterranean culture which fascinates us so much. We encourage you to research more about it or visit the Phoenician Ship Interpretation Center in Puerto de Mazarrón. 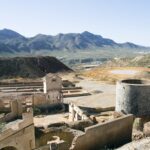 The unique landscape of Mazarron’s Mines

The Mediterranean lifestyle: much more than just a diet.